Seeing Southeast Asia Below the Surface

Michael Vatikiotis’ Blood and Silk asks enormously important questions and offers some satisfying answers about the nature of the societies of Southeast Asia. One of the more pertinent ones is, could this region have been even more successful than it turned out. The region might well have scaled greater heights of prosperity were it not held hostage to its internal crises that the author identifies, such as corruption, an unequal distribution of political power, and recurring conflicts.

To look back at the region from the vantage point of the present, it is clear that the first decade of the twenty first century, now generally accepted as an “Asian Century,” has witnessed China and India powering global economic growth. Now as China shows signs of slowing down from its blistering pace of expansion, the world is turning its attention to Southeast Asia and the opportunities it presents.

The scholar and diplomat, Kishore Mahbubani argues that the economies of Southeast Asia have continued to grow moderately but steadily. “A few years ago, Western media reported with great fanfare that India had surpassed China as the fastest-growing major economy in the world. There will be no such fanfare when the results show that ASEAN [Association of Southeast Asian Nations] grew faster than India in 2019. Nor are many people aware that ASEAN is already the fifth-largest economy in the world with a combined GDP [gross domestic product] of US$ 3 trillion.” (Mahbubani, The Asian 21st Century, 116-117).[1]

More recently, after attending the ASEAN Post-Ministerial conference in the first week of August 2022, Josep Borell, Vice President of the European Union, said that “in the face of today’s security crises and economic challenges, it is particularly important for the EU to be able to draw on partners like the ASEAN, who share the same attachment to multilateralism, free and fair trade, and a rules-based global order.”[2]

The world’s major powers have focused attention on Southeast Asia from medieval times, when China relied on Southeast Asia for textiles and rice, while Indian and Arab traders looked to that region for spices. The Portuguese conquest of Malacca in 1511 marked the commencement of the colonial era which saw European powers involved in a quest to exploit the potential of the region. The colonial era finally ended in 1945 when independence movements in these countries liberated them from the colonial yoke. 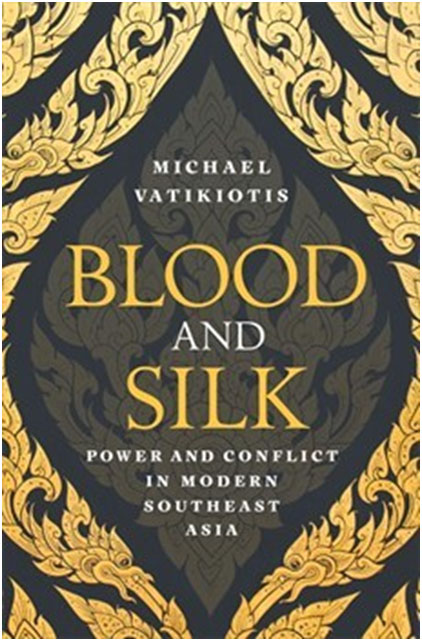 Blood and Silk came twenty-five years after the accomplished journalist, Stan Sesser, published his perceptive book, The Lands of Charm and Cruelty: Travels in Southeast Asia, in 1993.[3] Sesser’s main research question was to discover why these states had adopted polities based on authoritarianism and repression of their citizens. The author restricted his study to Singapore, Burma, Cambodia, and Borneo, which presents valuable subjects for analysis but he neglects the other countries in this burgeoning area. He rightly identifies the problem as the colonial histories of these countries and the erroneous policies of the major Western powers, the United States, Britain, and France after the Second World War, but he neglects their long precolonial history of repression under local monarchies. Sesser, a writer for The New Yorker, may be forgiven for getting some of his forecasts wrong—that the UN-supervised election in Cambodia would fail (though some would argue that the exercise was only a partial success), and that the Khmer Rouge may stage a comeback in that country.

In contrast, Vatikiotis’ book focuses on the eleven countries that constitute modern Southeast Asia (Brunei, Cambodia, East Timor, Indonesia, Laos, Malaysia, Myanmar, Philippines, Singapore, Thailand, and Vietnam), all of whom are members of ASEAN except East Timor, which has an observer status. Vatikiotis states in the introductory chapter, “This book examines the dynamics of power and the bewildering array of conflicts in Southeast Asia and offers a rather personal guide to understanding what makes this fascinating and strategically important part of the world tick”[4] (p. 21). Vatikiotis spent over four decades in Southeast Asia, from the time he landed in Bangkok in 1979 as a student, going on to become a correspondent for the BBC and Far Eastern Economic Review, based in Thailand, Indonesia, Malaysia, and finally Hong Kong. Later he set up an office in Singapore for a Geneva-based organization involved in mediation efforts in the region’s armed conflicts. The years of experience as a journalist, mediator, and traveller gives Vatikiotis a deep personal understanding of the region that the book draws on.

It is a serious study of the recent history of Southeast Asian countries, but rather than rely only on dry statistics and general perceptions, Vatikiotis dips into his experiences and insights to offer a deeper understanding of the forces at work and the many layers below the surface, that are not too obvious. In the process he shares some interesting anecdotes that help us understand the region and its people.  Like this one for instance, about the Thai King.

A stray dog adopted by King Bhumibol was revered as a national hero and became the subject of an animated movie; the crown prince’s pet poodle was commissioned as an air force officer and dressed in uniform. When one evening at a diplomatic dinner hosted by then US ambassador Ralph Boyce the poodle, named Fu Fu, jumped up to the dining table and started eating from startled guests’ plates, no one moved or thought to shoo the dog away (p. 71).

The Problems of Power, Greed, and Corruption

As the title suggests, the book is divided into two broad sections, “Power,” and “Conflict.” In the section on “Power,” the author begins by describing the eleven countries of the region (Timor is also included) in terms of the people, ethnicity, culture, governance systems, and their history from ancient pre-colonial days to the present. The remaining six chapters in this section attempts to explain why all the capital investment and increased levels of trade and industrial activity have not resulted in social justice or economic equality.

There are multiple reasons for the social and economic inequalities. The author tells us that that although the countries in the region saw a shift from monarchy to colonialism, and then to democratic governments based on popular support, the fact is monarchy continues to hold a fascination, and “understanding the role of monarchs and princes, both in the past and the present, is one of the keys to understanding how power is wielded today in Southeast Asia” (p. 66).

There are more reasons why this ancient area is unable to transition fully to derive the benefits of democratic governance. The author says that this is largely because even after independence freed these countries from colonial rule, the old power structures continued to remain intact. He explains that “power is regarded as an absolute attribute in contemporary Southeast Asian societies: you either have it, or you don’t. And your life is worth far less if you don’t.” The author adds, “This vestigial concept of power as a physical attribute, as opposed to something ephemeral or institutional, perhaps also helps explain why people are so reluctant to give up or transfer power, and why democratic rules are often flouted” (p. 80).

Southeast Asia’s long history created a large number of privileged elites, who are determined to hold on to their power. Their power struggles unleash violent conflicts, as a result of which ordinary people end up dying or suffering. The resultant mindless killings that punctuate the history of these countries are never dealt with by applying the law and protecting the human rights of those who were at the receiving end. Because of the delicate balancing of power groups in pluralistic societies, there is a clear tendency to let bygones be bygones instead of ensuring that justice is delivered, clearly seen in countries like Cambodia, Indonesia, Myanmar and Thailand. The transitioning to democracy has therefore remained superficial and halting.

Vatikiotis also looks at the role of corruption in maintaining the status quo and in derailing the impact of democratic processes and institutions, and undermining the effort to introduce real change for the benefit of common people. He shares his own personal experiences to illustrate the rampant corruption and its acceptance by the ruling classes.

The extent of corruption and the levels it has reached across all levels of government in many countries of Southeast Asia is both a source of concern to the citizenry of the region and a major strategic headache. The persistence of graft and greed in leadership circles is also a considerable obstacle to progressive political reform and change. We see this most clearly in the case of Malaysia and Cambodia (p. 197).

The Continuation of Internal Conflict, Injustice, and Breach of Human Rights

The section on “Conflict” looks at the insurgencies, ethnic conflicts, and violence that have rocked Southeast Asia as well as the state/military response to deal with these seemingly separatist moves. In a separate chapter, the jihadist groups and their influence in the region is examined. The author argues, “The failure of governments in Southeast Asia to address these internal conflicts makes violence an everyday occurrence across huge swathes of the region, inhibits democratic freedoms through the use of martial law and military occupation […]” These conflicts perpetuate “[t]he kinds of injustice and infringements of human rights that should by now have been put aside as the majority of countries enjoy middle-income levels of prosperity” (p. 216).

China was always the most important neighbor for Southeast Asian countries. With its growing economic clout, China has now become a significant player and possibly a threat. The author explains that modern Southeast Asia has spent nearly a century recovering from the two last invasions, one by Europeans expanding eastward and which lasted some four hundred years, and the other by Japan expanding southwards between 1941 and 1945. “Both these imperial intrusions were epoch-forming. To read any contemporary opinion or analysis of Southeast Asia is to become aware of the threat of a new invasion, from China” (p. 255).

The last chapter looks at the road ahead and concludes that “Southeast Asia by 2050 may well more resemble the region before the invasion of European powers after the 1500s” (p. 297).

Blood and Silk offers a broad sweep of the history, culture, and politics of the Southeast Asian region with considerable depth and scholarship. For those interested in looking at only one or more of the countries in the region, it may be exasperating to discover that the material is not organized country-wise but examines all the countries together, along the various dimensions of powerplay and conflicts affecting the region. If we accept the fact that all Southeast Asian countries are enmeshed together in a strange way and cannot actually be studied in isolation, the book is a valuable addition that offers comprehensive understanding of the region with rare insight.

There may be another lapse in the book. A focus on just the two sections on Power and Conflict provides a misleading, even skewed, sketch of the region, which has thrived on a third path, Consensus. The author would have done well to include a section on Consensus because it is ASEAN’s core principle, one that has generated the economic success story.

Note on the Reviewer

Vinod Kumar Pillai is an independent scholar with interest in literary fiction, development studies and popular science. He regularly reviews books for Rising Asia Journal. He is a consultant trainer for over eight years, training employees in the banking and financial services sector. He delivers training, designs and develops training content and contributes as a domain expert in developing content for e-learning and bank manuals. He graduated in Agricultural Sciences, and worked for over thirty years in banking, specializing in industrial credit, training, behavioral science and counseling. Besides literary fiction, development studies, popular science and training, he also devotes time to Cinema, Jyotish, podcasting and stock photography. He is an occasional cook and lives in Hyderabad, India, with his wife and son.

Recommend to your Library